Shortly after starting this review blog, I realized I wasn’t really writing reviews to crank out reviews for the non-masses. That’s a bit unselfish a thing to be doing for free. To keep this blog up, I plan to write mostly about ideas that interest me.
I’m a pop culture baby. A life of television, movies, games, books and music infects how I see the world, process it and deal with it. Celebrities regularly show up in my dreams and help me fight the zombies within.
Maybe that’s shallow, but it’s the ideas behind all the pop consumption that interest me.
I’m babbling. I hope to evolve these reviews into some kind of Frankenstein combo of essay, personal diary and review.
But some days, it’s just easier to crank out a straight review…

Gemlok is billed as a Mensa-level strategy game on par with chess and other ancient brain scratchers. That’s according to the label and probably the reason I burned off another Barnes & Noble coupon.
I’m not so sure about Mensa-level.
Of course, my GFF has already beat me to the punch and posted a REVIEW. Go read it.
Right now.
Do it.
Why are you waiting? What are you? Dumb?
Go read the review now.
Shells even took the picture you see above.
She also has a new avatar. It’s below. 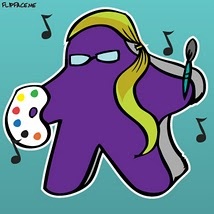 It summarizes some of her many interests and shows you her real hair color and that she has glasses and loooooves the color purple. Not the movie, well, maybe, but the real color purple. She’s also not a meeple, that just symbolizes Shells love of games. There’s a long story behind the avatar, but I, once again, digress…
Just subscribe to her blog. She knows her stuff. Read her reviews. Love her, just not as much as I do. Unless you’re her children or parents or brother. But love her in a different way, you know.

One gaming pet peeve—games with score pads. When I see a game with a score sheet, I always think, “Well, I can only play it this many times, then I gotta buy more score sheets.”

(Real life: I’ve never played a game so many times that I’ve ever run out of score sheets. I just like to think of my games as all-you-can-eat buffets, not pay-as-you-go cafeteria style.)

Once again, NOW. Shell’s reviews are way better than mine.
I hope Shells uses the previous sentence as a pull-quote in her press material.
I don’t really mean it, of course, well, except for this review of Gemlok. This review blows. Like hard.

(Note to self: Don’t submit this review to the Blogameys, the board game review/blog awards.)

(Also a note to Pam, my imaginary press agent: Keep this review out of the press kit. Get more stickers and an avatar. Something green where I’m a meeple riding a skate board and carrying an iPad. Pronto, pronto, we’re falling behind.)