Obsession, true obsession, distorts your reality.
Think back to that first childhood crush. Crushes are crushes because we fill in the vast missing information about the crush object with our own desires. We project our dreams like wet clay onto people who may not not even know we exist. We mold a reality that doesn’t exist into the crushes’ world. Pushing the clay metaphor farther, we create a Golem of the person, a Golem that does our bidding for a while, then eventually storms out of our fantasy castle into the real world to smash and break elements of our actual world.
The effort of maintaining an illusion of a person eventually becomes harder than reconciling the truth about our relationship with the crush object. We either give up or go crazy.
You get what I’m saying, right?

Love is a drug, love is a fantasy, obsession, obsession…. 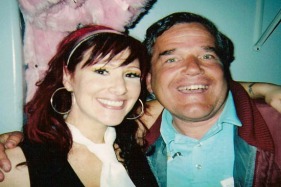 I Think We’re Alone Now is a documentary following two obsessed Tiffany fans. Yea, Tiffany fans.
Jeff, pictured above, has a good 20 years on Tiffany and in 1989, Tiffany went to court to get a restraining order against him after an instance where he tried to give her a Katana and six chrysanthemums after an old Japanese custom. He expected her to marry him. Jeff is a brilliant man who lives on disability because he has Ausbergers’ disease. This makes him socially awkward, but like a child. He’s only concerned about his obsessions and thinks everyone around him is just as interested. His dad died in Vietnam and his tragedies and disabilities have kept him from growing up and moving on. He’s good-natured and optimistic and believes himself to be fighting against the fascist world holding him and others back. He’s a brilliant conspiracy theorist.
But he sees reality much different than most. He built a helmet to talk to Tiffany spiritually. He talks of her as his best friend. He, at least, doesn’t think she’ll marry him anymore. He sees her at a lot of public events and to his and Tiffany’s credit, both are very friendly to each other and he doesn’t cross any boundaries with her. That said, he believes Tiffany hired security to protect her from him.
The other focus of the documentary is obsessed fan Kelly who’s much younger and about Tiffany’s age. He was born a hermaphrodite or ‘intersexual.’ Kelly identifies as a woman. At 16 in 1987, Kelly was in a bike accident that put her in a coma. In the coma, Kelly had a vision of some who looked like Tiffany whom she had never seen before. The first song she heard out of the coma was I Think We’re Alone Now, Tiffany’s biggest pop hit. That sealed it, she became obsessed.
Kelly is also very poor living on disability, her dad also died when she was young and she describes herself as having PTSD. Like Jeff, she is fiercely loyal, like a child emotionally, an outsider and has a positive outlook on life. Kelly, like Jeff, also has other obsessions, in her case it’s physical fitness. In many ways, Kelly is a sadder figure because of the strange hand nature gave her. Also, she’s not as far down the road to recovery as Jeff is. Kelly still believes Tiffany will marry her. She even says the difference between her and stalkers like Jeff is that she really loves Tiffany, unlike everyone else.
Both Jeff and Kelly are sad, sympathetic, creepy and likable characters. And that’s due to the filmmakers skill and home-made style of filmmaking. The credits are scraps of paper and there’s a lo-fi, ramshackle feel to the film. Some of the music cues are off and the editing often feels sloppy instead of intimate, but over-all the documentary stays with the subjects cutting back and forth between the two, slowly expanding each of their worlds.
So, why Tiffany? The question is really moot. Tiffany could be substituted for any number of celebrity obsessions. It’s just a matter of timing, dumb luck, mental illness and tragedy.
Tiffany’s in the movie peripherally, alway nice and pleasant and consistent. Even at the porn convention she goes to because of posing nude in Playboy, Tiffany’s professional to Jeff and others. Images of Tiffany certainly cover Jeff and Kelly’s walls, but that’s how she’s best used, as an image for Jeff and Kelly to project their neuroses. In looking over some other press of the movie, Tiffany’s manager has seen the film, but not Tiffany. And that’s probably best for her sanity.
The only misstep of the documentary is the producers kind of manufacture a meeting between Jeff and Kelly. I’m sure this was done to give the film some internal plot, but imposing plot in a documentary feels cheap and unneeded. Jeff introduces Kelly to Tiffany in Las Vegas, as Kelly has never had a one-to-one meeting with Tiffany. It goes as any fan meeting would. Kelly describes at as one of the biggest moments of her life, even though Tiffany didn’t go back to Denver with her. The only interesting part was seeing Jeff and Kelly talk past each other in discussing their shared interest. They both were downright rude to each other, however unintentional.
I think the producers realized that their manufactured ‘ending’ to the movie was a dud because the film ends about a year after their meeting to catch up on their lives. The good news is both Jeff and Kelly seemed to be in better places and happier. The filming must have helped each of them exorcise some of their problems.
Even Jeff, when asked if he’d like to marry Tiffany, said he prefers Allyssa Millano. He then holds up the God-Awful Embrace of the Vampire (which I assure you no ones ever seen in it’s entirety as they’ve just fast forwarded to Allyssa’s full-frontal nudity. I did.).

Some obsessions don’t die, they just change addresses. And like Allyssa’s nudity in Embrace, crushes are held in amber.