Feeling thinky last night I sat down to watch the French drama Seven Days. Ten minutes in and the rape and murder of an 8 year old girl later, I was more depressed than thinky, so I switched to the Lovecraftian sounding horror movie Parasomnia. (I know I said a few days ago, I like horror movies that aren’t afraid to off a child, but dramas are a different story. Child murder can both be a cliche and too hard a story to do right. Plus, there will be zero levity in this seven days story.) 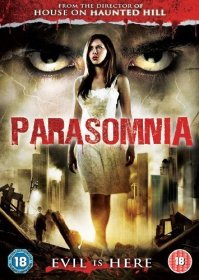 I had weaker reasons to watch a movie, but watching a movie just so you can learn a new word, the title, probably isn’t the strongest endorsement for a movie. Parasomnia is a disease, according to the movie (although WebMD doesn’t really bear this out), where you sleep all the time, like 90% of your life. Admittedly, this sounds like the best possible disease to contract if you had to contract a life-crushing disease.

The film starts with noted Hollywood nutcase Sean Young casually walking off a skyscraper to her grisly death. She’s barely mentioned in the rest of the movie and doesn’t appear again. I believe every movie should start this way, it keeps her employed and guarantees a crowd-pleaser right up top of every movie. The Godfather, Out of Africa, Up, every Batman movie—improved by Sean Young’s grisly unexplained death up top. Look into it Hollywood.

The story concerns Danny, an art student and 60’s record collector, and his growing infatuation with the impossibly adorable Laura, a parasomnia sufferer locked up in the world’s laxest mental hospital. Of course next to her room is a Hannibal Lector like mesmerist named Volpe, hooded and chained after a string of hypnotist-related murders. He’s evil incarnate and he’s next door. Like I said, world’s most lax security. The hypnotist/mesmerist is entering Laura’s dreamscape nightly and trying to control her. You know, standard movie stuff. You’ve seen the X-Files.

So, Danny’s visiting his recovering junkie friend when he sees Laura. (Yes, sleep disorders, rehab and serial killers all on the same floor.) Within two days, he’s kidnapped her (um, a felony) and moved her back into his apartment. The problem with an attractive young woman who’s been asleep 90 percent of her life is that she has the intelligence and personality of a beagle puppy. Seriously, she scoots around in the grass and rubs ice cream on her face. (Fortunately for the audience, this leads to topless sponge bath clean-ups.)
Oh, and she violently murders people under Volpe’s psychic projections in her sleep. That’s a problem.

This modestly budgeted film has a Lovecraft/steam punk vibe and generally looks good. There’s even a steam punk art show held by Lector, ur, Volpe at the end of the film. The movie does have some decent character actors in it besides the aforementioned Sean Young including Timothy Bottoms, Jeffery Combs, and a cameo by Allison Brie (Community, Mad Men) and director Joe Landis.

A note to any movie about Jeffery Combs (Re-Animator, other awesome horror movies): If you use Jeffery Combs in your movie, make sure he goes batshit crazy at some point. That’s what he does best. No one chews the scenery better than Combs. Crazed scientist is his specialty. In Parasomnia, Combs plays a cop and plays it straight until almost the end. C’mon, twitchy, unhinged, arrogant and paranoid is what he does. Not low-key energy and stoic cop.

Low-key energy is how I’d describe the first two-thirds of the film. The film doesn’t really catch fire until the last part. This is due mainly to the guy playing Danny. He’s not bad and certainly be fine in a best friend role, but he’s just not interesting enough (even when he’s committing multiple felonies) to hold the main role. The girl who plays Laura (an ‘introducing’ credit) does better, but does better because she’s suppose to be dumb, innocent and a bit flat, but she sure is adorable. (One pet peeve movie: why does Laura always have lip gloss and make-up on? In dream sequences? Coming out of a long coma? Underwater?)

One thing I like about moderately budgeted horror movies is they generally have the freedom to pursue the kind or horror they want to do, more creative freedom. As a reviewer, they also generally have very identifiable strengths and weaknesses. A miscast actor really stands out, or poor lighting or an effect. Also, you can see because of budget, the director put all his eggs in a particular strength in a film, a quality actor, a sequence, the script. Rarely with a smaller budget does every area of the film get the same high effort. So, this is another note to small budget horror films (and this film didn’t have a tiny budget because it generally looked good and had some name character actors): STOP USING CGI! You’re not Avatar, be creative with set work and physical effects, even old school optical effects can get the job done better. Parasomnia uses CGI for all of Laura’s dreamscape scenes and it looks really fakey, as does 90 percent of CGI in movies with a budget under 20 million. Funny thing is, all of the movie’s physical effects—the throat slashing, gut spilling, head exploding kind—all look great. Then the CGI shows up and it’s like we’re in a video from the 80’s waiting for Night Ranger to show up. And everything they did in the dreamscape could have certainly done as a physical effect with some creativity.

Admittedly, I’ve never been a fan of CGI as my first thought is almost always, “Hey, that’s CGI, not ‘that’s awesome.'” When ever some guy’ss head is blown off with a shotgun with the old exploding blood melon head you’ve seen a hundred times, I almost always buy it instantly even if upon further, later inspection, I spot flaws. That never happens with CGI.

Overall, a mixed recommendation for Parasomnia. There’s some interesting visual style in the film, the villain is well played, the physical effects are good and there’s a few surprises. On the down side, some poor performances, a few big plot holes and bad CGI. It ain’t the pathos of Lovecraft.