I like so-called Ameritrash games better than European strategy games. There, I said it.

Essen is coming up and all of the gaming blogs are gearing up for the latest worker placement game or auction game or game that recreates building a 17th century citadel or whatnot. But I’m most excited about the latest Fantasy Flight opus Mansion of Madness, a goober filled box of theme, mystery and asymmetrical play. Loves me the Lovecraft board games. And Fantasy Flight is one of the top Ameritrash game makers.
So, what is an Ameritrash game? While the name sounds negative, i don’t see it that way. I’ve never read a formal explanation, but in my mind, an Ameritrash game is one that emphasizes theme over mechanics. It’s a game with a lot of bits and flavor text and atmosphere. This usually means a certain amount of luck has to be factored in and the winner may not necessarily be the ‘best’ player. Good Ameritrash games tell a story, set a scene. Power gamers tend not to be Ameritrash fans, as the advantages aren’t as easily quantified compared to the more abstract, mechanics-based games. The playing of the game is more fun than the winning of the game.

We have a few more European style games and the ones I like the most, like Agricola and Fresco, have a pretty strong theme. The ones I dislike, mostly Renier Kniza games (I mean, I should like a game called Zombiegeddon, right?), the theme is just an afterthought. Cool mechanics are not enough. 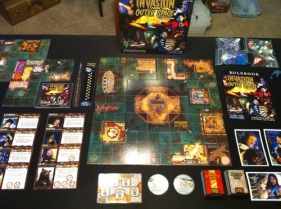 Flying Frog is a relatively new game maker, but they’ve come out swinging like the big boys with two solid games, Last Night on Earth and Touch of Evil.

When Shells heard about their new game Invasion from Outer Space, she put in the order. Well, a few months later, the new game is in and it’s a better game than it’s predecessor Last Night on Earth. Here’s the description from Boardgame Geek:

Invasion From Outer Space, The Martian Game is a fast-paced game of fiendish Martians, Big Top Heroes, and SciFi Movie Action. Players take on the role of either the Carnival Heroes, using their special talents and working together to fight off the Martian Invasion; or as the invaders themselves, waves of Martian Soldiers and Flying Saucers, blasting Humans with Ray Guns and unleashing their vile alien technologies upon the Earth.

Featuring a modular game board, eight Carnival Heroes to choose from (such as the Fire Breather, Strongman, or Jo Jo, the dancing Bear), an army of Martians to start the invasion (including Martian Champions such as the dreaded Zard Beast), and several different Scenarios to play that drastically change the game; Invasion From Outer Space is designed to create a cinematic feel as the story and game unfolds.

Also, as Invasion From Outer Space is built using the Last Night on Earth game engine, the two games are fully compatible. With ease, players can now have their Martians invade the small town of Woodinvale, Zombies attack the Carnival, or even play a massive game with up to three independent factions (Heroes, Zombies, and Martians). The possibilities are endless.

So drop those roasted peanuts, strap on your jumpsuit, and step into the spotlight…the Martians are Coming and the Invasion From Outer Space has begun…

The game uses the Last Night on Earth engine and can be played alone or combined with LNoE for Martians versus Zombie fun. We have LNoE and all of the supplements and Invasion fits in nicely, both from a graphic and gameplay stand point. I’m a fan of Flying Frog’s photographic style of character boards and cards. Hey, you can even be a bear against the Martians.

If you’ve played LNoE, you’ll pick up Invasion quickly. The rules of conflict are pretty simple die rolls with lots of modifiers. The Martians are easier to kill than the zombies, but can shoot Ray Guns and deploy bigger Martian creatures and tech. So, the longer they’re in the game, the more powerful they are. This is not a symmetrical game, the Martian player will win more than the humans. It’s a fact. I played twice as Martians and won both times, although the humans did get close. Unfortunately, both games came down to a few bad (or in the case of the Martian player, good) die rolls. You really can be ruined with a handful of bad die rolls. So goes the invasion.

The game isn’t a simple war game, but built on scenarios. You have a certain number of turns to finish a goal. Mostly, the humans have to stop the Martians from accomplishing some goal. Outlasting the Martians does seem the best way for the humans to win. The human player is individually stronger with many more options per turn, but the Martians overwhelm with pure brute numbers.

How is Invasion better than LNoE? Two ways. One, the carnival theme is just plain more fun. You can play a bear! Visit the funhouse, coral a crowd, shoot yourself across the board or put out a fire. Two, and more importantly, there’s much more for the Martian player to do. In LNoE, it seems like the zombie player was just shuffling along, cycling through cards to get any advantage. Little strategy and mostly luck. Yes, the game is still very luck-based, but the Martians seem more in control and tactical. This balances out for the humans because they’re just so darn easy to kill. (In LNoE, the humans were smart just to stay away or only do range attacks.)

In keeping with Flying Frog tradition, Invasion also comes with a music CD to play in the back ground to help set the mood. It’s pretty simplistic carnival/space music and OK, but not as good as the precious game CD’s. But no deal breaker. Also,in Flying Frog tradition, new scenarios should be showing up on the website for free. A suggestion for future expansions, make an expansion that further joins Invasion to LNoE, much like Steve Jackson’s Munchkin’s Blender sets. Also, more humans, the first batch of eight humans seems pretty close to some of the humans in LNoE, at least in abilities. Some kind of long distant sharp shooter would be awesome.

So, if you own Last Night on Earth and even like it a little bit, you should buy Invasion. If you’re looking for a fun beer and pretzels game and are attracted to the Mars Attacks! Theme, check out Invasion. The bits are nice, the theme is solid and the Ameritrash is strong.