In November of 2008, I developed a sort of political amnesia. All of the bad stuff of the past 8 years somehow just seemed forgiven and in the past. It wasn’t because I thought the new Obama administration would be extremely good, he was just Not Bush. He’s the political equivalent of the rebound girlfriend. America just needed two or three bland presidents to reset the stage.

One trope about life, especially American life, is that you can always have a fresh start, completely re-invent yourself if you want. Well, remnants of the past are always there, lurking in the back ground. You may spend a life dodging the past as the past worms it’s way out in strange ways. Our political system is ripe with old corruption and problems that are not only systemic, but encouraged by not only the wealthy, but the unwitting public who’s bought into the free market myth. 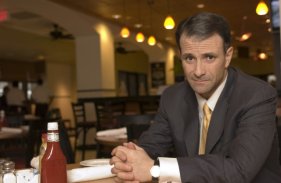 Casino Jack and the United States of Money, the new documentary from the guys who did Enron, The Smartest Guys in the Room, follows the rise and fall of uber-lobbyist Jack Abramoff. The film connects him to all the major Republican power players of the last thirty years, but more importantly reinforces the point that lobbyists are the real legislation engines running the country.
This isn’t a wonky film, but a breezy one, clearly laying out a life of small corruption unchecked until he was finally caught and what his capture and modis operandi means for American politics. It’s a spy movie masquerading as a political documentary. While many on the right would call it a polemic, I didn’t find Casino Jack to be overtly politically bias toward the right, they were just the current set of douchebags in power.
If you followed the news, you probably know about Jack Abramoff bilking Indian Casinos in the mid-2000’s. However, it’s the story before that one that’s so interesting. Abramoff represented the Russian mob and sweatshop owners in a tiny American pacific island country. He basically got legislators to rubber stamp illegal Chinese immigrant abuses in sweatshops on US soil. That’s the value of the true free market.

The documentary is mostly comprised of Republican interviews, some who saw no harm and others who do have regret. Abramoff helped to create the revolving door of politics and lobbyists in the last thirty years. He truly believed government can and should be bought. It’s pretty horrifying.

See this film. It, oddly, isn’t a downer nor a polemic, but does highlight a problem-the lobbyist problem and how it buys access to power. Obama last week was complaining about the anonymous 503 PAC groups giving to the Republican party. This is how lobbyist control candidates. A modern politician is nothing but a 24/7 fundraising machine to keep his campaign alive. These PACS outspend Democrat by a measure of four to one, but Democrats are not immune. They just aren’t as successful as Republicans at raising money.

I have a simple voting rule. If an issue is on the ballot and one side carpet bombs the TV with ads and there’s almost nothing on the other side, I cote for the side that didn’t spend money. If someone has to spend that much money to convince me, it’s probably not in my best interest to vote for it. The same goes for candidates. We could fix the political system in 20 years if we eliminated money from the process, but that just ain’t gonna happen. For every Abramoff that’s caught, another hundred lobbyist are working within the law doing 90 percent of the unethical crap he did.

Now, I know why I developed political amnesia. It’s just plain better for my day to day happiness.

Posted using BlogPress from my iPad