Remember J-horror? Before those sparkly vampires? While most horror trends succumb to their own clichés, the best of the Asian horror boom of the early 2000’s still works. There’s a randomness and inevitability to the horror. Dread.

A Tale of Two Sisters doesn’t rely of the wandering, pale, black-haired, disjointed female ghosts cliché of other J-pop horror efforts. At it’s heart, it’s a drama about divorce and loss between two sisters. The best horror films are usually dramas where the fear and rotten emotions of conflict are rendered into horrifying flesh. The first two-thirds of The Exorcist is also a drama about the change of growing up and the new changes in the world.

There’s really a pretty crafty mystery at work in ATOTS. One I didn’t catch in the first viewing so many years ago. The set-up is extremely familiar, two teen sisters are forced to move into a haunted country house with their dad and evil, new stepmother. Slowly, crazy shit happens. The dad, certainly Lithium’s best customer, is emotionally unavailable. The step-mom vacillates between extreme roles, uncomfortable in any of them. The older sister tries to protect the withdrawn younger sister from the evil step-mother. You get the drill.

Of course, that’s not what really is going on. Clues abound.

The pace sometimes borders between slow and deliberate and slow and plodding, but the cinematography is fantastic. I don’t think I’ve ever seen a shoddy looking Korean movie. (Japanese, yes. Korea, no.) They’ve gotta have a great film school there.

Things I learned from A Tale of Two Sisters:

—Evil spirits, like young’uns in action films, love to hide under the sink.
—Korea has the best wallpaper.
—Pets, always the first to go.
—Puberty, the worst monster of all.
—The psychiatrist-waiting-for-patient two shot. This technique begins every third Korean film.
—Old Dunlap bags are the best way to store bodies. (A shout-out to Audition)
—Put an adorable Korean baby in the film and I’ll add a star to the review. Sorry, no Korean baby in ATOTS. You earned your three star rating honestly.
—I’m beginning to think my star-rating system might be flawed.
—Also, I wrote this review for the “Lithium’s Best Customer” joke which wasn’t framed well enough.

Do It: Tom Scharpling. Do it, Tom Scharpling. The king of free entertainment, Scharpling has had some crushing professional, personal and physical set backs lately. Me, I’d go all fetal baby, but Tom Scharpling is just getting better. He’s steamrolling the chumps. His radio show, The Best Show on WFMU just celebrated it’s 500th show, listen to it. The Best Show reminds me why I wanted to be a DJ so long ago, why I was a DJ so long ago, before the corporate vultures picked the bones clean. He just interviewed Weird Al and Tommy Stinson for his podcast Low Times. And he’s teamed up with podcasting’s reigning king of ‘making it about me’ Marc Maron for another funny podcast, The Marc and Tom Show. The dude should be more famous. That said, he’s still grinding away like everyday is game four of the playoffs. I miss one post one day, and I’m a big baby Sisyphus, screw that rock. Not Tom. He’s back at that rock. Also, he’s a Tweeteraholic. Do it, Tom, just keep doing it.

Avoid It: The usual Disneyland Dad Father’s Day hangouts. Valentino’s and Godfather’s. Pizza Hut and Pizza Ranch. Dairy Queen and Cherry on Top. Champion’s Fun Center and the bowling alley. On Father’s Day, these places become a giant bowl, nay well, of sadness, desperation, averted eye contact, forced interest and that one awkward smile as divorced dads try too hard, way too hard. Look, I know that sounds cynical. There’s plenty of happy dads and kids scarfing down half-priced meals on dad’s day, but it’s inevitable, there’ll be one father/daughter paring who’s psychic emotional scars will almost be palpable to nearby tables. Your J-pop pitch black spirit devouring souls under the guise of healing. I know, I’ve been there. I’ve been (am) poor, planning a whole day around one trip for crappy, half-price pizza and a game of pinball. I’m always putting too much stock in that one day.

Related side note—Why son, Why? Why don’t you want to talk to me? I’m sad. I miss you. Just the thought of Father’s Day…

The Facing Book: Dear Facing Book timeline, why must you remind me that I’ve done Jack and Squat between 2007 and birth? 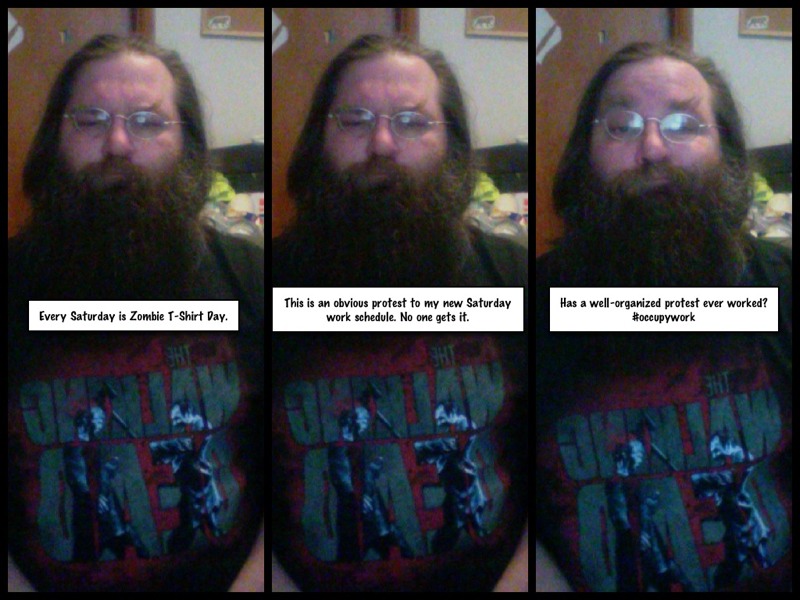