The first time I saw 2k1:ASO, I was bored silly. The second time, I fell asleep midway through the movie.

I feel like I haven’t given the movie much of a chance. I love most other Kubrick movies with Dr. Strangelove and A Clockwork Orange in my top 10 all-time favorites. So, why not 2k1:ASO?

I found a high-def version and watched it on my 96″ projector screen. What a difference that made. I also split up watching it into two parts. I went in knowing the film was slow. 2k1:ASO is the original big screen space movie. While the 60’s aesthetics feel slightly dated, the effects are flawless, simple and much better than Star Wars nine years later. And much better than some of the CGI efforts today.

The visuals were designed to meditate on the themes of film. Every other shot could be a picture in a fancy coffee table book. And like a coffee table book, Kubrick lingers on each image a bit long. The static image overload, classical music and minimal dialog tend to lull me into a sleepy dream-state. And like waiting for a play, there’s five minutes of classical music at the beginning, during an almost arbitrary intermission and even after the credits, changing how you’re suppose to even view the movie. You’re supposed to be lulled. It’s movie as hypnotism. The clean spaces, the empty spaces, the slowly spinning geometry. The pace showcases an overconfident director. An hour could have easily been cut, but Kubrick wants you to engage with all the images and mull them over. He wants you to think during the movie, not just absorb and feel. Absorption and emotion are abstracted concepts. Kubrick distances us from the main character, Dave, at the same time humanizing the computer HAL.

I’m sure you know the plot. A 12 foot black monolith suddenly appears to apemen. They learn how to use bones as tools to kill. The same monolith appears 40 feet below the moon’s surface, it’s a transmitter pointing them to Jupiter where there is a much larger monolith. Dave and HAL are sent to investigate. Dave kills HAL. Dave goes on a trip.

I saw the sequel and honestly remember nothing about it. I think the monoliths were supplied by aliens. Eh. I saw the monoliths as an evolutionary spark, an evolutionary jump and a metaphor. The apemen became men after contact with the monolith. Modern man is defined as one who creates tools to destroy others. (Never mind that many animals use tools today.) The bone as the tool reaches the end of its usefulness when we create an artificial man (HAL) who in turn, like man, tries to kill us (represented by Dave). Only by killing our own tools can we evolve, like a space Billy Pilgrim, into a new incarnation, the space fetus. Pretty rudimentary, I know.

If you saw 2k1:ASO and were bored, two pieces of advice—see it on a giant screen and go in knowing it’s a meditation piece. Heck, split it up by the intermission.

Do It: Seconds of Pleasure by Rockpile (1980). The Summah of Power Pop continues with this loose rockin’ record from Dave Edmunds and Nick Lowe. Picked it up on emusic cheap with bonuses featuring Everly Brothers covers and some spiffy live tracks. Dave and Nick back in their heyday.

The Tweeter: Did they give Nora Ephron Epinephrine? #toosoonforwordplay

The Facing Book: Dear Cymbalta, thanks for dissipating my back pain and easing the Black Blanket days, but writing is harder. Are you psychosomatic? Does creativity have a chemical base or is it just the creative urge that is tampered? Or both? 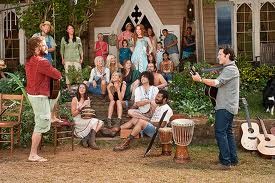 Sitcoms have ruined comedy movies for me. With sitcoms, we get to really know the characters. Even secondary characters. The Bumblebee Man on The Simpsons, by now has been onscreen enough for his own movie. All the initial comedic stereotypes get filled out to a more full character. But movies paint with a broad brush, especially in comedies. You may get a few specific details to extrapolate out a personality, then it’s off to plot town. And that’s the good part, secondary characters are usually treated worse. The gay best friend, the obnoxious neighbor, the dumb blonde, etc. With dramas and even horror, secondary characters can be mysterious and non-obvious because those traits serve the story. However, in comedy, obvious is the quickest route to hilarity.

An informal The State movie, Wanderlust mixes Lost in America with director David Wain’s last movie, Role Models. It’s like Lost in America, as Jennifer Anniston and Paul Rudd decide to chuck the rat race and start over. It’s like Role Models because the two normal characters become involved in a weird subculture and learn that they’re okay people to the point where they over embrace their new lifestyle. Role Models had LARPing and Wanderlust has hippies.

It’s an amiable movie with a few chuckles. The broad brush stereotypes–from the commune set to Rudd’s McMansion brother (Ken Marino and wife Michaela Watkins)– do get filled in to varying degrees of success. Everyone, except the two very obvious bad guys, end up likable and happy. It’s well-cast with everybody in alternative comedy showing up and getting a laugh. They’re great with plenty of throwaway lines.

The problem is Rudd and Anniston. They are both basically playing another slight variation of their already established personas. Not a ton of chemistry there and some of their actions seem a function of plot and not character. Both of them needed to ‘go for it’ more. More manic, please.

The movie is a hard R, but not a mean or gross hard R. Oh, Joe Lo Truglio and your penis.